Regular house bricks could be used to power electronics after a major breakthrough in energy storage technology. Researchers at Washington University in St Louis, Missouri, discovered that the cheap and ubiquitous material could be converted into energy storage units to hold electricity, potentially transforming houses into giant super capacitors. “Our method works with regular bricks or recycled bricks, and we can make our own bricks as well,” said Julio D’Arcy, assistant professor of chemistry at Washington University. “As a matter of fact, the work that we have published… stems from bricks that we bought at Home Depot right here in Brentwood (Missouri). Each brick was 65 cents.”

‘You know there is energy being stored in bricks in the form of heat.  It is great to see the innovation in the flesh. With so many little boosts in energy supply (energy bricks as batteries, windows with solar) being off grid even in the city is more and more a reality’ Nuable 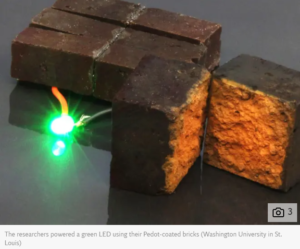