Scientists in China hope the device can generate sustainable power in a low-cost, efficient manner. Once placed on a person’s swinging arm, the airflow is enough to generate power, the researchers said.

“Our goal is to solve the issues that the traditional wind turbines can’t solve,” said lead author, Dr Ya Yang, of Beijing Institute of Nanoenergy and Nanosystems, in a statement. “Unlike wind turbines that use coils and magnets, where the costs are fixed, we can pick and choose low-cost materials for our device.”

In their paper, published in Cell Reports Physical Science, the researchers show the frequency of the oscillation varies with the wind speed exerted on the device, noted Cochrane.  So far, the device has been able to power up 100 LED lights and temperature sensors, its makers said. It also has a wind-to-energy conversion efficiency of 3.23%, which they claim exceeds previously-reported performances on wind energy scavenging.

‘We have all heard of Tiny Tempah, now meet Tiny Turbine.’  Nuable 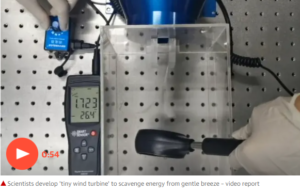